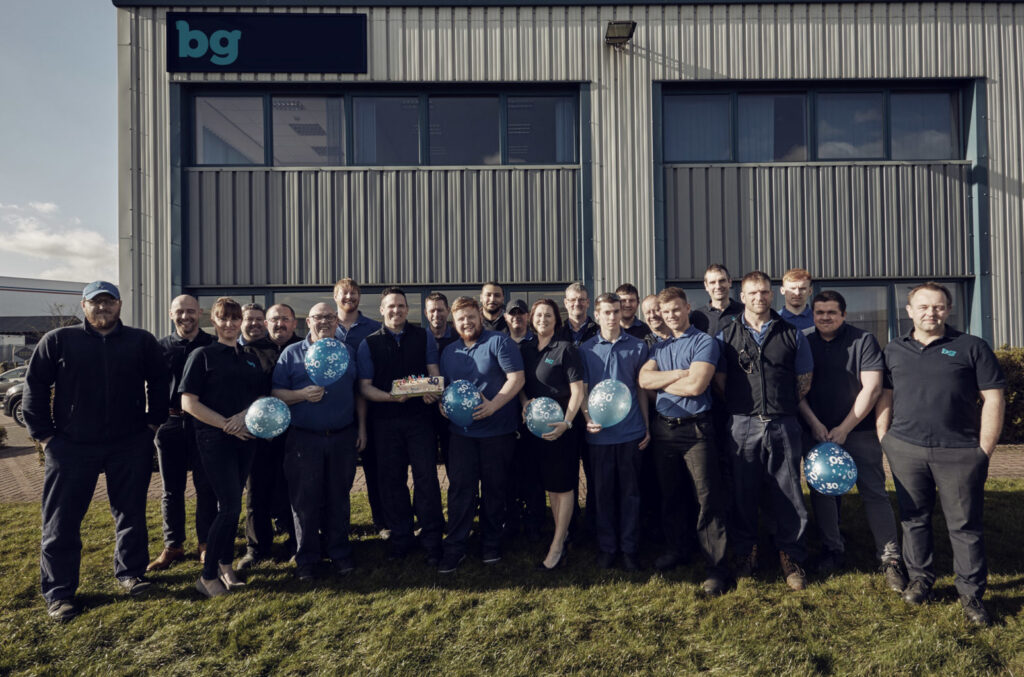 Chesterfield based BG Engineering, one of the region’s leading subcontractors for precision machined components, has marked 30 years in business by tripling the size of its manufacturing facility.

The company has acquired more than 27,000 ft2 of manufacturing space adjacent to its existing facilities in Holmewood, increasing the size of its factory floor to over 44,000ft2. Combined with the office space and external car park, the total size of BG Engineering’s factory now spans 80,000 ft2.

To mark the 30th anniversary and as a way of giving thanks to its employees, BG Engineering recently held a day of celebration which included holding a lunch for staff at a local restaurant to mark the occasion and thank them for their hard work and dedication.

Antony Holmes, Managing Director of BG Engineering said: “We would like to thank our staff and customers for their support over the past three decades. Our ongoing success is due to a commitment to employ highly skilled people and continued investment in our manufacturing facility, team and services. This is an exciting time for our business as we’re working towards securing AS9100 accreditation to become an approved aerospace supplier as part of our future growth plans.”

From its beginnings in 1988, BG Engineering has become one of the region’s leading sole CNC machining company, with more than 30 staff including four apprentices and 18 CNC machines, boasting customers located across the UK and Europe.

Antony Holmes joined the business in 1994 as Workshop Manager and later became Managing Director. During the same year the company invested in its first CNC machines. Following increasing demand, the company moved to larger premises in 2002, taking over a unit in Staveley, Chesterfield, where approximately ten staff were employed.

In 2004 Business Development Director, Shane Greveson, became a shareholder and assisted in moving the business to Holmewood Business Park in 2007, in the same building as the Bryan Donkin (Honeywell) Gas valve factory. The primary aim was to create an onsite supplier customer partnership.

Cooper Brown Enterprises, owned by Marie Cooper and Chris Brown, invested in BG Engineering in 2017, resulting in a strategic partnership between all four shareholders that is now helping to take the business from strength to strength.

The company has recently invested in a new apprentice machine cell and extended its services following the acquisition of an in-house pressure test and assembly facility.

Over the past 30 years, the company has elevated itself into one of the leading precision engineers in the region. Through strategic and customer driven investment BG Engineering has built relationships with some of the largest global OEM’s in the energy industry.

BG Engineering prides itself on its approach to quality and inspection. The company is ISO 9001 accredited and is focused on continual improvement by having its own in-house inspection department to ensure that all parts reach the customer ‘right first time.’

We have an extensive range of highly equipped in-house inspection and testing facilities.

We are introducing automated processes to our capabilities creating industry leading efficiencies.

We have some of the largest plating tanks in Europe.

Registered in England and Wales.